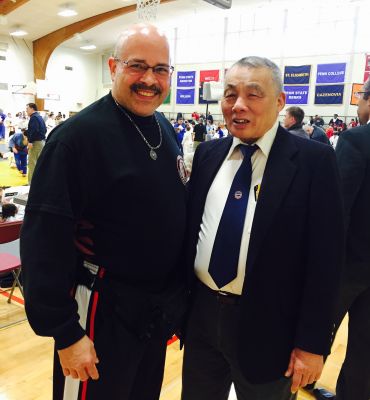 Richard Hugh  (Shichidan/Coach & Technical Advisor)
In 1950 Sensei Hugh enlisted in the United States Air Force, and, after basic training, he was sent to Puerto Rico Ramey Air Force Base for a three-year tour of duty with the Strategic Air Command ( SAC). In January 1953, He enrolled in a sport judo class started by Sgt. Paddy McDonald, who just came back from training at the Kodokan in Japan.
In August 1953, SAC sent a team of seven judo masters and three karate masters to tour all SAC bases to demonstrate the arts of judo and karate which were being taught to air crew members as means of physical conditioning and combative measures. Sensei Hugh and George Maeda were selected to accompany the team. The judo masters were led by Mr. Kotani, then eighth degree black belt, followed by Otaki, Tomiki, Sato, Ishikawa, Hosokawa, and Kobayashi. The karate masters were led by Mr. Obata, then sixth degree black belt, followed by Kamada and Nishiyama. They toured the Island of Puerto Rico for three days and put on four demonstrations. Before they left, Mr. Kotani awarded Sensei Hugh and George Maeda the rank of Sankyu (third brown belt) and gave them membership to the Kodokan.
One of the few books on Judo, available in English, was Charles Yerkow's "Sport of Judo". Sensei Hugh contacted him and was invited to work out with his group at the Flushing YMCA in New York City. From him, he learned of the New York Dojo headed by George Yoshida. Later, he learned of the Washington Judo Club at the Pentagon. Donn Draeger and Jimmy Takemori were instructors.
After his discharge in 1954, Sensei Hugh started school at Virginia Polytechnic Institute and began a judo club and started his membership with Shufu Judo Yudanshakai and the United States Judo Federation.
After graduation in 1957, Sensei Hugh moved to Elizabeth, NJ to work and began the practice of judo with the Elizabeth YMCA Judo Club with Gordon Uglow and the New Bruswick YMCA Judo Club with Tim Dalton.
In 1958, Sensei Hugh changed jobs and moved to Delaware where he started the Wilmington YMCA Judo Club. In the meantime, he traveled almost every weekend to the Baltimore Judo Club for workouts on Saturdays and received lessons from Kenzo Uyeno and Lanny Miyamoto. Sensei Hugh and Kenzo also traveled to the Washington Judo Club on Sundays.
During the early 60's, Mr. Ishikawa migrated to the United States and settled in the Philadelphia area. Sensei Hugh became an assistant instructor at the Ishikawa Judo Club. In the mean time he, with the encouragement of Dr. E.K. Koiwai, started attending AAU meetings, first locally and later nationally.
Because of the presence of Mr. Ishikawa, a two-time All Japan Champion, many high ranking judo masters visited his club, among them: Mr. Kudo, Mr. Ishikawa's teacher; Mr. Daigo, an All Japan Champion; Mr. Hosokawa, a well-known expert in unarmed defense; Mr. Murata, a police champion. It was an experience that will stay with Sensei Hugh throughout his life.
One of the policies of the Shufu Judo Yudanshakai is that, while one is a competitor, one should also be a teacher and a referee. This policy enabled Sensei Hugh to become certified as an IJF (International Judo Federation) Class A referee in 1976.
Even today, Sensei Hugh continues this tradition to referee and teach at the Delaware Judo & Ju-Jitsu Association.