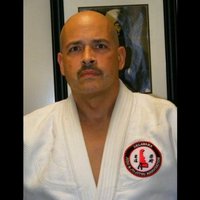 Sensei Velazquez has practiced martial arts for forty eight years. In 1970, at the age of fourteen, he had his first karate lesson at the Jackson Avenue Community Center in the South Bronx of New York City. He graduated from Manhattan Vocational Technical High School in 1974 and furthered his education at the Bronx Community College. In 1977, he decided to join the United States Marine Corps and attended boot camp at Parris Island, South Carolina. At the age of 21, upon his completion of boot camp, he received orders and was assigned to Okinawa, Japan. There he took advantage of this opportunity to train in karate where it was founded. He searched and found a dojo just outside the rear gate of Camp Foster Marine Corps base. Little did he know that it was the Hombu Dojo for Uechi Ryu Karate and would train under the Founders’ son, Sensei Kanyei Uechi. After completing his 12 month tour in Okinawa, Sensei Velazquez returned to the United States and continued to study various styles of martial arts during his tour in the Marine Corps. In 1985, he was honorably discharged from the Marine Corps at the rank of Staff Sergeant as a Military Police Officer and settled in Delaware with his wife.

Once in Delaware, he pursued and started his career as a police officer with the Wilmington Police Department in Wilmington, Delaware. In 1989, Sensei Velazquez began training in Shuri-te Karate at the Mahato Karate Association under Shihan Michael Graves. Shihan Michael Graves is a former USA National Kumite team Captain and holds many titles in National and International competitions. Shihan Graves has studied the art of Shuri-te Karate for over forty years; and has been inducted in the USA Karate Federation Hall of Fame. He is presently the Menkyo Kaiden (Successor) which he received from Shihan Jerry Barbar of Mahato Karate Association of Little Rock, Arkansas. Shihan Barbar held Yudansha (black belt) ranking in the arts of Judo, Ju-Jitsu, Karate-do and Kenjutsu.

Sensei Velazquez was also the Senior Instructor for the Mahato Karate Association where he taught Ju-Jitsu under the guidelines and requirements of the United States Ju-Jitsu Federation. He also taught a children’s karate program at the Mahato Karate satellite school, located at the Clarence Fraime Boys & Girls Club in Wilmington, DE. Moreover, he was the assistant coach for the Delaware Karate Team when traveling and accompanying the team to National Tournaments.

In 2005, after completing 20 years, Sensei Velazquez retired from the Wilmington Police Department. He continued his career in law enforcement after being hired by Delaware Capitol Police as a Corporal. Shortly thereafter, he became the Northern Operations Police Defensive Tactics Instructor. In March of 2014, he was promoted to Sergeant and currently is a supervisor at the Northern Operation in Wilmington, Delaware.

In 2007, Sensei Velazquez was awarded his 2nd degree black belt in Judo under Sensei Thomas Little, 7th Degree black belt, of Bushido USA, which is registered under the USA Judo. Sensei Little is a member of the United States Judo Federation and USA Judo. At this time, Sensei Velazquez started the Delaware Judo & Ju-Jitsu Association which opened at the New Castle County Adult Activity Center/PAL and continues at it’s present location.

Presently, Sensei Richard Hugh, 7th degree black belt, instructs at Delaware Judo & Ju-Jitsu Association. Sensei Hugh was the Chief Instructor of the Wilmington YMCA Judo Club back in 1958. He has served as Chairman of the Referee Development and Certification Committee of the United States Judo Federation (USJF). He is a 7th degree black belt under the USJA, USJF and the Kodokan. Sensei Hugh holds a Class A Referee License (World and Olympic level competition) from The International Judo Federation (IJF). He also held positions as Chairman of the Rules Subcommittee and Referee Certification Subcommittee of the United States Judo, Inc. Sensei Hugh was formally awarded and accepted the title of Technical Advisor and Coach for Delaware Judo and Ju-Jitsu Association.

On Saturday, March 9, 2019, at Akron, Ohio,  A Special Event was conducted with the combined efforts of the United States Ju-Jitsu Federation (USJJF), USA Karate Federation (USAKF), Kwanmukan (KMK), USA Traditional Kodokan Judo (USA-TKJ) & Police Self-Defense Institute (PSDI). Over 200 Leaders of Jujutsu / Ju-Jitsu / Jiu-Jitsu / Karate / Judo were inducted into the Hall of Fame! This Wonderful Celebration marked the 10th Anniversary of the passing of Hanshi George E. Anderson which founded these National / International Organizations... Sensei Velazquez was honored when he was inducted into the United States Ju-Jitsu Federation (USJJF) and as a pioneer of Judo in the USA Traditional Kodokan Judo (USA-TKJ) Hall of Fame.

Other styles of martial arts in which Sensei Velazquez has studied includes Aikido, under Shihan Zenko Okimura, of the Aikikai Foundation of Delaware, Newark, Delaware. He served as a Board Member (Vice-President) for the Aikikai Foundation which is a non-profit organization. Sensei Velazquez also trained in Brazilian Jiu Jitsu and Pekiti Tirsia under Allen Sachetti’s Brazilian Jiu Jitsu School, in Newark, Delaware. He also trained at Diamond State Aikido.